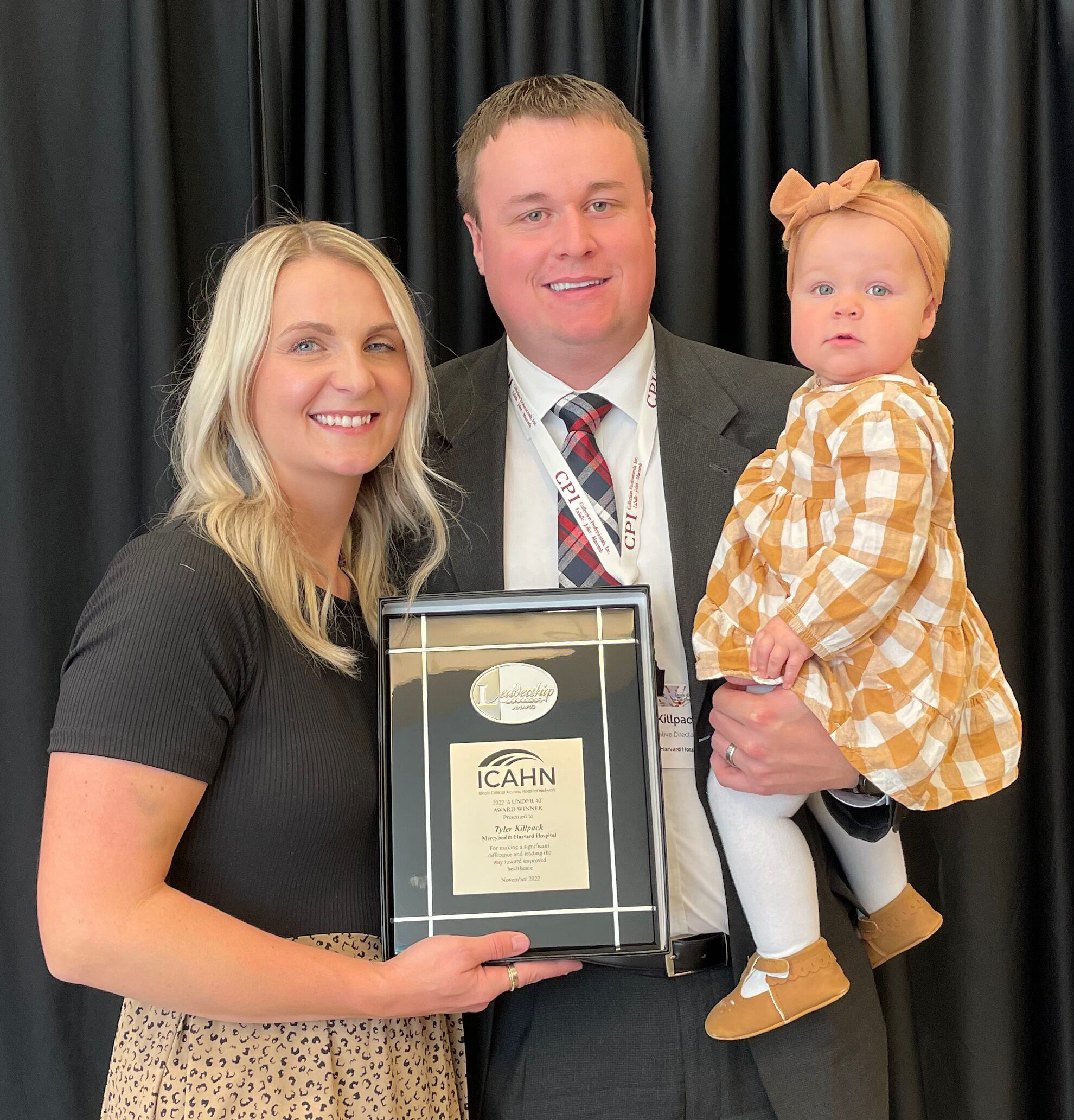 Tyler Killpack, Director of Operations/Chief of Staff to the CEO, Mercyhealth Harvard Hospital, recently received the 2022 “4 Under 40” Leadership Award from the Illinois Critical Access Hospital Network during ceremonies held November 10 at the I-Hotel in Champaign. He is shown here with his family.

The Illinois Critical Access Hospital Network (ICAHN) announced its “4 Under 40” Hospital Leadership winners including Tyler Killpack, Director of Operations/Chief of Staff to the CEO, Mercyhealth Hospital, Harvard, during its Annual Conference and Awards Ceremony, held November 10 at the I-Hotel and Conference Center, Champaign.

Nominated by Javon Bea, President/CEO, Tyler is known to “embody Mercyhealth’s mission of serving with a passion for making lives better. He demonstrates this by putting the needs of his employees first so they, in turn, will put the needs of their patients first. His regular presence, rounding, and employee engagement are key to the delivery of exceptional care.

“Tyler is one of the most humble, empathetic people I know,” Bea added. “He actively listens to and mentors his employees, helping them grow in their careers. Utilizing his skills in leadership, business development, finance, and healthcare operations, Tyler has been able to serve as a key leader in not only the critical access hospital environment but also in the development and execution of the new Mercyhealth Hospital in Crystal Lake.”

Under Tyler’s leadership, Mercyhealth Harvard Hospital has maintained The Joint Commission’s Acute Stroke Ready designation and is accredited as an Illinois Emergency Department Approved for Pediatrics’ facility with recent successful surveys. He secures access to the Small Hospital Improvement Program, the Medicare Rural Hospital Flexibility Program, and American Rescue Plan grants and assesses the needs of the facility, in addition to serving as Chief of Staff to the Chief Executive Officer of the hospital.

ICAHN’s “4 Under 40” Hospital Leadership Award is open to new and emerging leaders aged 40 and under employed by an ICAHN member hospital or as a member of this hospital’s board for at least two years with a strong record of innovation and outstanding performance.