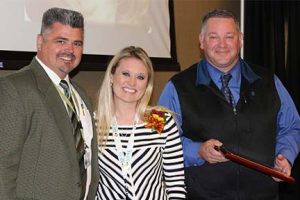 “Tanna’s compassion, dedication, and leadership to our organization and her patients are her greatest leadership traits,” said Gene Allen, Clinic Manager, Lawrence County Memorial Hospital. “Tanna always has a positive attitude, and she is always thinking of ways to better our organization.”

The Acute Care Clinic, which was the brainchild of Ms. McCullough and two other employees, opened in September 2016. Since that time, the clinic has seen an average of 318 patients a month, with as many as 448 patients in one month. She has also trained multiple students in the LCMH service area, been a leader in meaningful use efforts, and has worked many pain clinic hours, particularly after the pain clinic provider resigned, all in addition to running a successful Rural Health Clinic for the Lawrenceville, IL hospital.

“If Tanna sees a need, she will work to fix it. We once had an issue with the employees going on strike at a local nursing home. Tanna took the day off to go to the nursing home and deliver water, help bathe patients, and help in any way she could,” said Allen. “She did not act as an NP but as a caring and concerned human being. Tanna inspired other staff to help on their free time, too, until the situation was resolved.

“This is just one example of leadership that Tanna has shown,” he continued. “She deserves more awards than she has, but she is very selfless and doesn’t expect anything in return. Tanna  does these things because it is the right thing to do, and because she has compassion and dedication.”