After serving in the military, Mr. Purvis’ first job in healthcare was in 1969. He rose quickly in the hospital leadership ranks and soon became a regional vice president with Alliant Management, providing financial and strategic insight to multiple hospitals. In 2003, he decided to “take a step back” and was named CEO for Wabash General Hospital.

“Of course, stepping back was never in Jay’s vocabulary, and he quickly put his vision to making Wabash General the mecca for orthopedic and surgery care for southeastern Illinois and a rival to many,” said Pat Schou, ICAHN Executive Director.  “Jay rebuilt the physician and practitioner team and created new programs and opportunities for Wabash General employees. He even designed a townhouse for visitors so they could see that rural communities have resources and class.” 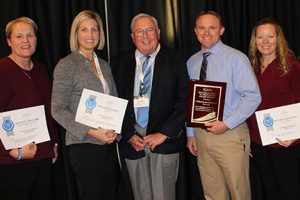 Regarding his involvement with ICAHN, and in addition to being one of the very first hospitals to be named a critical access hospital, Schou noted that Jay rarely ever “misses a meeting or event” and that he was the leader behind the implementation of the ICAHN insurance program as well as the development of the governing board summit program.

“Jay is class personified and one to be admired,” Schou continued. “We are truly honored to present you with the Rural Hospital Lifetime Achievement Award for 50 years of dedicated and tireless service as an outstanding hospital leader.”

In addition to Mr. Purvis’ Lifetime Achievement Award, Wabash General Hospital, under his leadership, also received MBQIP (Medicare Beneficiary Quality Improvement Program) Awards for quality of care, top performance, and its HCAHPS “5-Star” Rating, the highest rating available. Wabash General Hospital was also the recipient of ICAHN’s “Excellence in Innovation” award for its Joint Camp. The event was attended by approximately 150 hospital leaders from across the state of Illinois, in addition to several of Mr. Purvis’ family and hospital staff.