What started as a 7-year-old Peoria girl's question on why people were being hurt in Ukraine evolved into a multi-state effort to ship medical supplies to the embattled nation. And it led Chris Manson, who is OSF HealthCare's vice president of government relations, to wonder why he was on a plane bound for Eastern Europe. At least, until he met an 18-year-old Chicago woman who was bringing supplies – including a Kevlar helmet and a ballistics vest – to her brother, who was fighting over there. "I then thought I was going to let the trip happen," he said. "A sort of 'go with the flow.'" And that flow carried him to the presidential palace in Poland and nearly 200 miles into Ukraine, where he was able to meet up with officials there, assess their needs, and find out what happened to an AMT ambulance OSF had sent over there (in April). "I realized that what we are doing is having an impact, and I came away from the trip better off than when I left," he said. 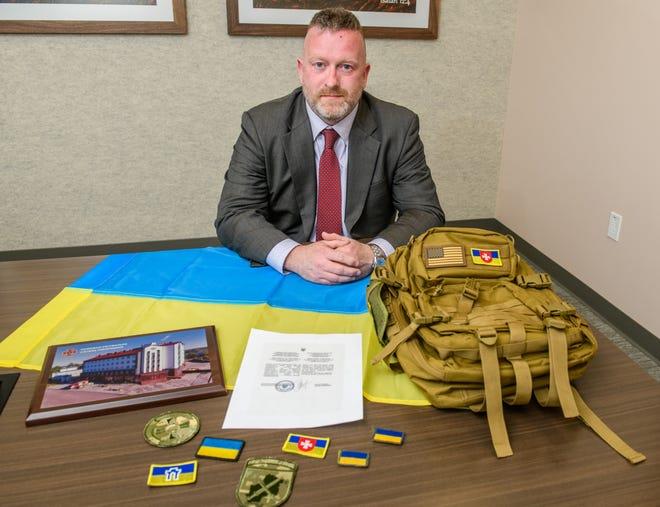 It all began with a news program showing the carnage occurring in Ukraine. Manson's daughter asked what was happening, and why. She wanted to know what could be done. Manson said that little seed of an idea led to him coming up with what he thought was a crazy idea – sending an ambulance to a war zone. He figured they needed medical supplies and the ambulance would help. "We saw them using DHL delivery vans to move people out of the area and thought, 'This could be better,'" he said. But how could it be done? He made several calls and was astonished at the reception he got. "Not once did I get anything other than, 'How can I help?' It was amazing," he said.

Within a few weeks, an ambulance from Advanced Medical Transport was on its way to Ukraine. It was stuffed with medical supplies donated by OSF, but also by hundreds of employees who, out of their pockets, bought emergency blankets or "quick-clot" gauze bandages. Again, Manson was blown away by the generosity. "Not a single person that I called didn't try to help," he said. It was a level of generosity he didn't expect. What started out as a single ambulance full of stuff quickly turned into two. And (in May), four more ambulances are headed there. Vehicles are from Tennessee, Minnesota, Ohio and North Dakota. A medical bag from the Dunlap Fire Protection District is now with the Rivne, Ukraine, regional fire department. All those donations, he said, add up and show how it was and is a group effort. Even if the supplies don't last or are destroyed in the fighting, it's symbolic. "It shows the Ukrainians that we are trying to help, and the message that I got when I was there was 'thank you,'" he said.

Manson went over to Ukraine because he wanted to see how the ambulance and the supplies were being used. But it was risky. He hooked up with the Ukrainian Medical Association of North America, which donated a helmet and a bulletproof vest. After 10 hours, he was in Poland. The next day, he went to Medyka, Poland, where he crossed the border into Ukraine and into the city of Shehyni. "I walked across the border. I was dropped off by a taxi on the Polish side and met a driver I had previously arranged for on the Ukrainian side that took me to Lviv to meet with the Ukrainian officials." He then went farther east to Rivne, which is about six hours west of the border – but still four hours east of Kyiv, the nation's capital. While in Rivne, he met with the regional governor and toured a Ukrainian veterans rehabilitation hospital. He met with patients and staff at a regional hospital there and discussed what supplies they needed. He also visited a fire station there, where he used his experience as a volunteer firefighter to discuss issues regarding their firefighting and emergency medical efforts amid the bombings. 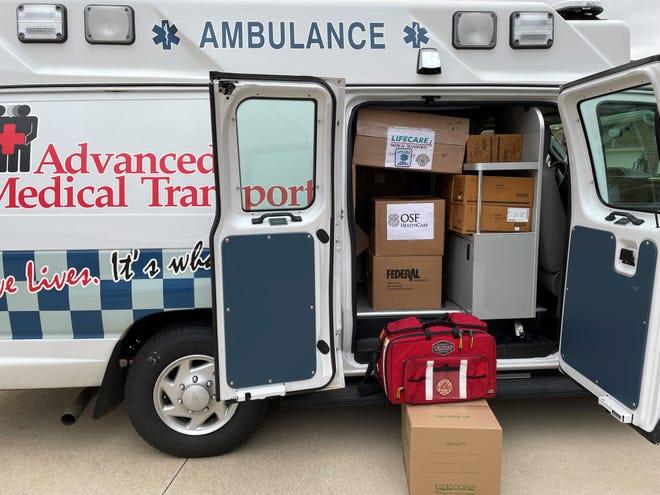 He was in Ukraine for two days and one night and said he never felt threatened. The closest thing he got to being nervous was on the way out when his driver was acting jittery. "He said that where we were was where a missile strike had come a day or so before. And he didn't like being there. I never really felt like I was in danger, though," said Manson, who is a veteran of the U.S. Marine Corps Reserve. "When I left, I gave my body armor and my helmet to a school administrator there who was taking it to his son who was fighting on the front. "The thing about what I saw is that everyone over there is involved in the war effort. They are all trying to do their part to help. It kind of reminded me of the American War for Independence. They just want to be free."

Another thing he learned while there is what they need and how they are coping. Ukraine, he said, is a modern nation and had spent years rebuilding infrastructure only to see it destroyed in the past few months. Where he was in Rivne and Lviv, he saw soldiers, checkpoints and weapons that didn't let him forget there was a war. But there were also people trying to live their lives as normally as they could. People were getting coffee at cafes, he said.

Once he returned to Poland, he was invited to the Presidential Palace, where he met with Wojciech Kolarski – the secretary of state at the Chancellery of the President of the Republic of Poland. There, the two talked about trying to get more resources into Ukraine as well as the Illinois National Guard's partnership with the Polish military. Europe is already sending ambulances and supplies, but the need is so great that even a handful from the United States makes a difference. "The level of gratefulness that the Ukrainian people demonstrated towards me and those who were bringing supplies in left a real mark on my heart," he said.

So, what now? Manson said he and others are working with the Ukrainian Medical Association of North America to bring more medical supplies over. There were four ambulances headed over following this story, bringing the total sent through his and others' efforts to six. They hope to get more. "They need other things, like IV pumps and cardiac monitors, as well," he said. What's happening, as best as he learned, was that in some cases, the supplies are staying in the "rear" or in the western part of the nation to replenish supplies sent to the front lines. In other cases, the supplies from America are going right to where the battles are occurring.

Peoria's ambulance operated in Kyiv and Bucha, the suburb of Kyiv where several atrocities were reported. "The ambulance, if it lasts or not, is there to help people. If it's destroyed, then it served its purpose for when it was there," he said.