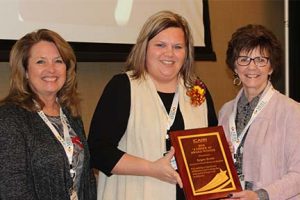 “Raigan is self-motivated and results-oriented. She takes ownership and steps up to lead many work groups/committees, and she has a passion for doing the right thing even if it means more work for her,” said Cynthia Stewart, Director of Marketing/Communications/PR, UnityPoint Health Memorial Hospital, Carthage. “The team trusts her to follow through.”

Stewart further added that Raigan demonstrated leadership from the very beginning of her time at Memorial Hospital as a staff nurse in the Emergency Department and that Raigan was promoted quickly. “Raigan was soon identifying projects that would help the department and was asking for more responsibility,” said Stewart.

“To put it simply, when Raigan is at your table in a group, you know she is going to step up, initiate conversation on how to solve problems, and that she is going to take action,” said Stewart. “These are all signs of a good leader.”