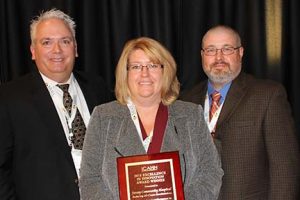 Participants vying for the honor were encouraged to submit innovations implemented at their respective hospitals which initiated a new approach to improve patient relationships, implemented a new process flow or life-safety improvement, found a creative way to motivate and inspire staff, or fostered a successful community project.

Jersey Community Hospital had been experiencing a high all-cause readmission rate, as was reported on the 2015 CMS Hospital Compare Report, according to McNear. After internally tracking readmissions for real-time data, the goal was to bring the rate down from 16.2% to 10%, and subsequently, move from being a “3-Star” HCAHPS-rated hospital to a “4-Star” by involving several hospital departments and post-acute care partners in the community.

From July 2017 to May 2018, Jersey Community Hospital’s readmission rate actually decreased from 16.2% to 7%. The changes that were made in order to achieve this decrease in JCH’s  readmission rate became a reality by implementing the following:

“All of these interventions have led to improved communication and individualized patient-centered care,” said McNear. “Indications that this project has been successful are that JCH obtained a ‘4-Star’ rating and that we have achieved an increase in HCAHPS scores for care coordination, medication education, and discharge planning.”

“We are very proud of our team for achieving this level of excellence in innovation as well as health quality,” said Jon Wade, CEO. “This is truly a team effort that recognizes our dedication to delivering a healthcare experience of which our patients and staff can be proud.”