During Annual Conference ceremonies held in November via Zoom, the Illinois Critical Access Hospital Network celebrated several individuals for their longtime dedication and commitment to the betterment of rural populations and the critical access and small rural hospitals that serve them. 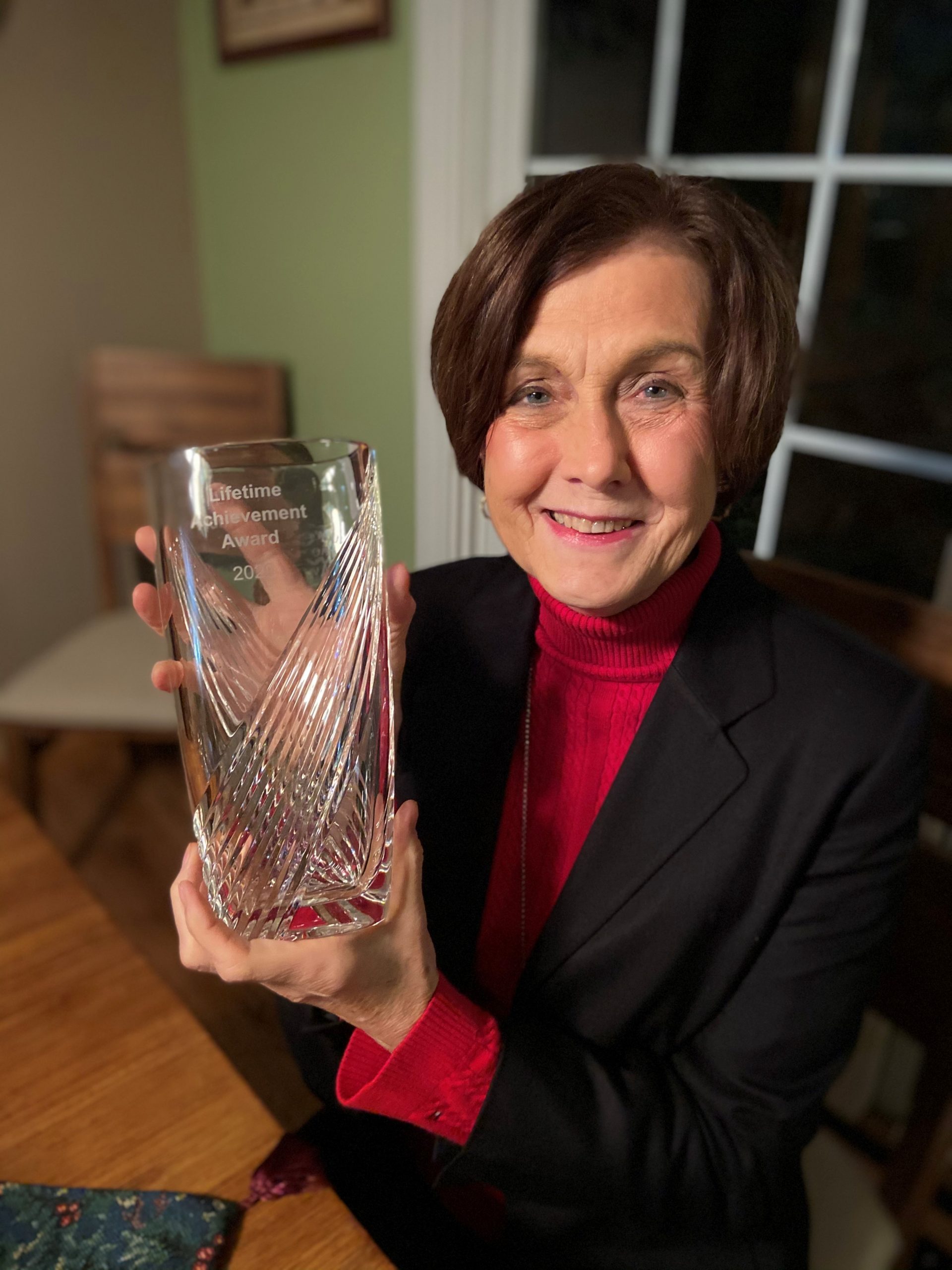 Ms. Newby initially graduated from St. John’s Nursing Program, Springfield, and received her Bachelor’s in Science in Nursing in 1984 from St. Louis University, a Master’s of Science in Nursing in 1988 from Southern Illinois University-Edwardsville, and her PhD in Nursing Research and Nursing Administration in 1996 from St. Louis University. Nancy joined Washington County Hospital in 1996 as its director of nursing, after having been an emergency department and intensive care nurse for several years in the St. Louis area.  She was named to the CEO role in 1998 and spearheaded the hospital’s conversion to critical access hospital (CAH) status in 2000 as the eighth CAH in the state.

“Nancy served Washington County Hospital and the local community well for 20 years, retiring in 2018,” said Pat Schou, ICAHN Executive Director. “She was often known to use her nursing skills to help in the emergency department and other areas of the hospital to ensure patient care was covered well.”

Ms. Newby applied for a development grant in 2003 to get support for the new critical access hospital network. Schou, then working as the CAH coordinator for the Illinois Department of Public Health, agreed to work with Nancy on the grant and met weekly at the Hillsboro Pizza Parlor for two months pulling together the federal grant.

“Fortunately, or unfortunately, Nancy’s hospital was not awarded the grant, but the idea of ICAHN was born during those grant planning sessions,” said Schou. “Nancy believed CAHs would benefit from sharing resources and education. She knew from the very beginning that we could be stronger and ‘better together.’”

As one of ICAHN’s founding members, Nancy was elected to its first board in 2003 as vice president.  She became its first board president in 2004, upon the resignation of Sue Urso. Nancy served as president until 2006 and remained on the board until 2010.  She served as education chairperson and often was the first CEO to have her hospital participate in an ICAHN project, taking advantage of a new education program or grant. Nancy received the ICAHN Presidential Award in 2010 for her work and commitment to the ICAHN organization.

In addition to her ICAHN service, Nancy was a board member of the Illinois Hospital Association, serving three terms in her role representing the rural hospital community. She was an active member of the Illinois Organization of Nurse Leaders, American College of Healthcare Executives, American Cancer Society, and American Organization of Nurse Executives. Nancy was appointed to the Governor’s Task Force on Health Information Exchange and Telemedicine in 2008 representing, once again, the rural hospital community as its spokesperson.

“Her insight and expertise have been incredibly instrumental in building ICAHN as it is today, being the voice and face of rural hospital communities in Illinois,” added Schou. “We owe Nancy a great debt of gratitude for her work and passion for healthcare and nursing.”

Nancy lives in Nashville, IL with her husband Chuck and has four children, Sara, Meg Nicole, Heather, and Eric, along with seven grandsons and one granddaughter. Nancy’s son, Eric, is a Paralympic champion in rugby and is preparing for the 2021 Paralympics. 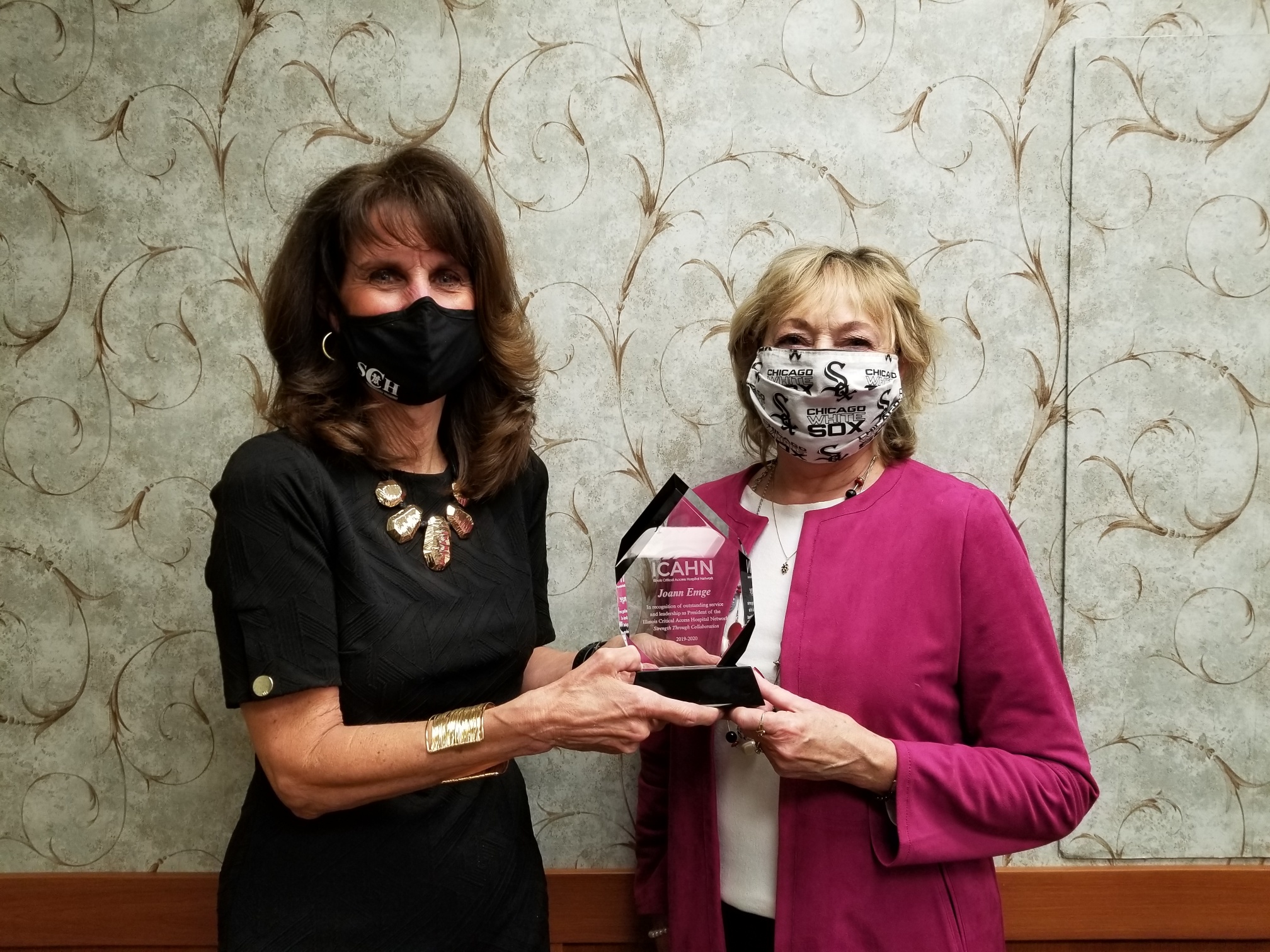 “Leading in the time of COVID is extraordinarily difficult, but that is exactly what Joann has done for us in these unprecedented times,” said Pat Schou, ICAHN Executive Director. “Joann has never hesitated to accept a challenge in all her years as a CEO, and rural healthcare is better for her service. She not only provides great ideas for our rural hospitals, she ensures the ideas are put to practice and work effectively and efficiently. We greatly appreciate the expertise she lent to our membership during her term as President.”

Sparta Community Hospital became a critical access hospital and a member of ICAHN in 2005, and Ms. Emge has served its Education Committee as a member since that time and as chairman for several years. She has served on the ICAHN Board of Directors since 2015 and the Illinois Rural Community Care Organization (IRCCO) Board since 2017. She has also been a member of the ICAHN Regulatory and Legislative Committee, the Trailblazer Committee, the Quality Performance Committee, and President-Elect in 2019, before being named 2020 ICAHN Board of Directors President. 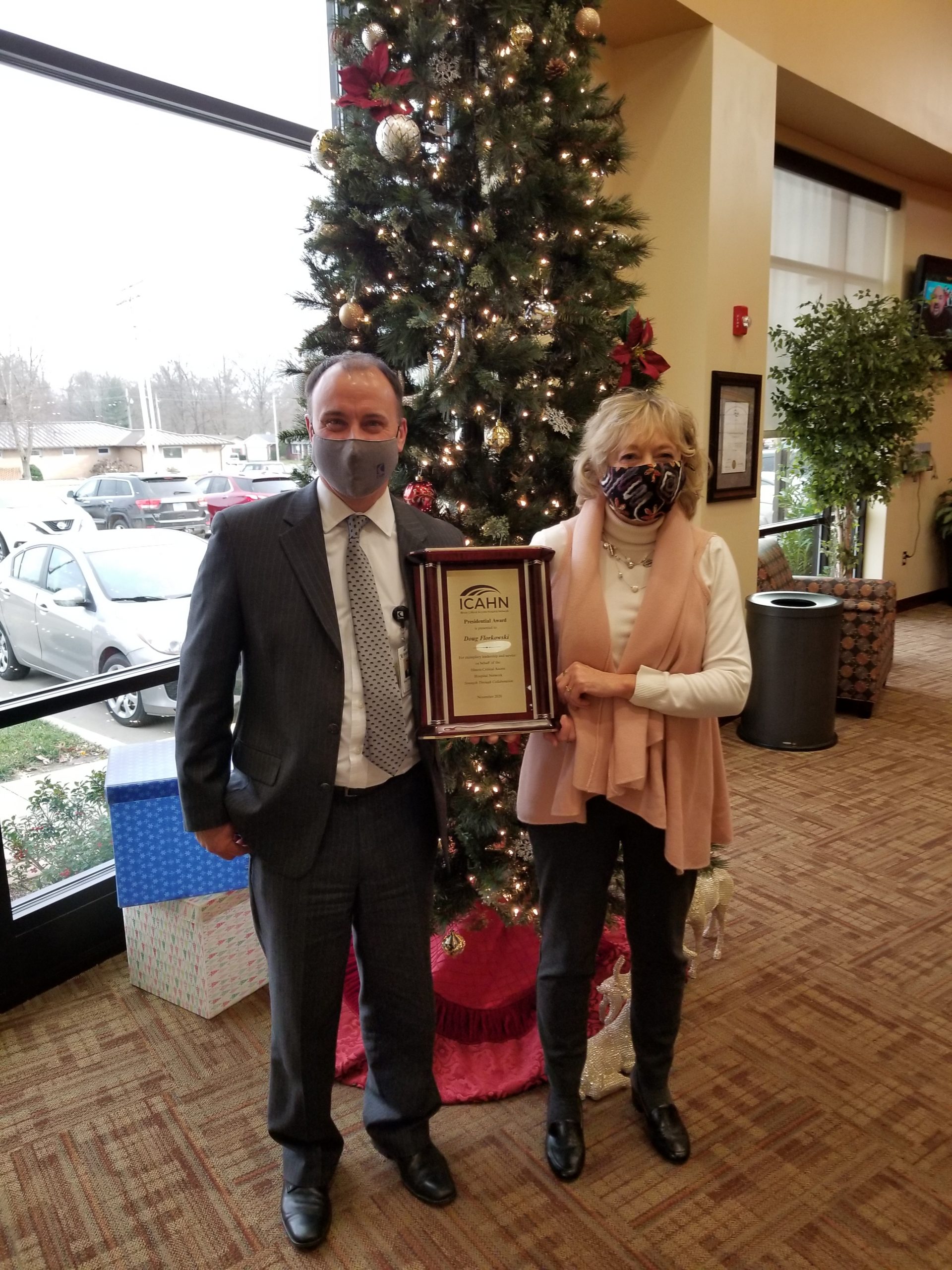 Doug Florkowski, CEO, Crawford Memorial Hospital, recently received the Illinois Critical Access Hospital Network’s 2020 Presidential Award. Mr. Florkowski, a native of New York, received his bachelor’s degree from the State University of New York-Fredonia, and a master’s degree as a speech pathologist from the same university. Doug had a hockey scholarship and played hockey for the Fredonia campus, later being inducted into its Athletic Hall of Fame in 2005. He was recruited by Crittenden Health System in Kentucky, where he served as Director of Rehab after graduation.

Doug moved through the ranks within the Crittenden Health System and was promoted to Vice President within a short time. He was named as the CEO for Lawrence County Memorial Hospital in 2006 and was instrumental in the hospital’s financial turnaround, hospital rebuild, and improved hospital response within the community. In 2017, Doug was hired as the new CEO for Crawford Memorial Hospital, Robinson, where he continues to serve in that position.

ICAHN has been fortunate to have Doug serve many roles within the organization. He first served as Regulatory and Legislative Committee Chairman, was then elected to the Board in 2014, served as Secretary/Treasurer in 2017, President-Elect in 2018, and ultimately, was named Board President in 2019. He has served on key network committees and was actively involved with the formation of ICAHN’s rural accountable care organization.

“We are grateful to Doug for his tireless work and for being at the helm when we were named Illinois’ ‘Community Star’ by NOSORH,” said Pat Schou, ICAHN Executive Director, about the honor bestowed upon ICAHN by the National Organization of State Offices of Rural Health. “Doug has been an outstanding leader. He has led ICAHN positions with conviction, maintaining an open mind while also serving as our greatest supporter, sharing new ideas and information with colleagues. He believes it is important to say ‘yes’ and to give back. We sincerely appreciate his willingness to carry our banner, be our voice, and set the vision for rural healthcare in the years to come. Doug has all the traits of a leader you can respect and emulate.”

“Dr. Molt has been a valuable asset to our organization and our member hospitals for many years,” said Pat Schou, ICAHN Executive Director. “He has the clinical expertise necessary to perform a careful and confidential review of any surgeon in our hospital network. His work has helped numerous hospitals improve the quality of care provided by their medical staff, and for that, we are grateful.”

ICAHN’s EPRN assists member hospitals with improving quality of care by monitoring the performance of their medical staff and identifying areas that need performance improvement. Panel members, like Dr. Molt, are selected based on having active medical staff status at an ICAHN member hospital, at least one year of rural provider experience, a letter of nomination or recommendation from a hospital CEO, and a completed application verifying credentials.

Dr. Molt received his undergraduate degree from Washington University and professional degree from Mount Sinai School of Medicine in New York. He completed his surgical residency at Mount Sinai Medical Center in 1983. He began practicing in 1985, after finishing a surgical oncology fellowship at Memorial Sloan-Kettering Cancer Center, New York.

Dr. Molt has been practicing in his hometown of Fairfield since 1999. He serves as an adjunct professor for Rush University Medical Center – John H. Stroger Jr. Hospital of Cook County Integrated General Surgery Program since 2017. Today, Dr. Molt serves as the Chief of Surgery and as President of the Fairfield Memorial Hospital Board of Directors.

The Illinois Children’s Healthcare Foundation received the Illinois Critical Access Hospital Network’s highest award for leadership and ongoing service commitment to rural communities. In March of 2020, when COVID-19 shut down schools across the state, providing daycare became a stressful and expensive problem for parents who were also essential healthcare workers. Many were forced to go to work while their children could not go to school, or in some cases, their own daycare because of the pandemic.

The Illinois Children’s Healthcare Foundation stepped in and provided a $500,000 grant to alleviate this problem. By utilizing grant monies, extended April through August to 28 participating ICAHN member hospitals, families who may have been unable to find or pay for daycare and possibly need to quit their jobs to care for their own children at home, were able to continue working and helping others at their respective hospitals as the battle against COVID-19 raged on.

“We are profoundly grateful for the dedication and courage of every employee at ICAHN’s member hospitals as they respond to the pandemic,” said Heather Alderman, ILCHF President. “Funding childcare for essential staff hopefully alleviates one stressor for those balancing their critical roles as parents and hospital team members. Given the limited resources for childcare in many rural communities, we are proud to partner with ICAHN to address this need.”

“ICAHN hospital members are very appreciative of the ILCHF financial support,” said Pat Schou, ICAHN Executive Director. “This support made a marked difference in the lives of our rural hospital employees, and I cannot count all the thank-yous we heard. You cared about our rural hospitals and communities, and that was special to us. We are all deeply grateful.”