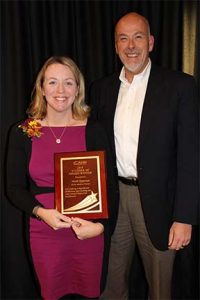 “Heidi’s greatest leadership trait is the ability to work with anyone, regardless of their position at the hospital or relationship in the community,” said Steve Tenhouse, CEO, Kirby Medical Center. “Heidi is always open to suggestions and is willing to modify her approach when the circumstance requires. She has initiated regular ‘rounding’ meetings with departments of the hospital to gather ideas on marketing needs and to allow her to plan into the future for marketing or community events. She is always thinking ahead.”

In addition to completely rebuilding the Kirby Medical Center website, Heidi has played an integral part for Paint Piatt Pink, the hospital’s annual breast cancer awareness program that engages employees, patients, the community, and schools; the hospital’s capital campaign, “What a Little Change Can Do” for its building expansion project; and the KMC Sage City Triathlon, a successful triathlon using connections Heidi had previously secured from the Kirby Derby.

In addition to this, Heidi, either for herself or for the hospital, has won 16 different awards through ISHMPR, the Illinois Society for Healthcare Marketing and Public Relations. These awards have ranged from recognition for the hospital’s website, to KMC’s employee engagement marketing, and for multiple fundraising publications.

Heidi started her career at Kirby Medical Center 15 years ago as an office assistant at Kirby’s Atwood Rural Health Clinic. She became the hospital’s first marketing coordinator and eventually, the Director of Marketing and Community Relations. Heidi now has over eight years of experience in community relations, strategic planning and marketing, fundraising, foundation initiatives, special event management, and development of internal and external communications. She also serves as chairperson of ICAHN’s PR-Marketing-Development Peer Network Group.